Living on the "Roof of the World"

The Pamir and Karakoram ranges, which are part of the broader Hindu Kush Himalayan region, include some of the tallest peaks in the world and are home to a mosaic of cultures, peoples, and landscapes. Known as the “Roof of the World,” these magnificent ranges span parts of East Asia, South Asia, and Central Asia, including Afghanistan, Pakistan, and Tajikistan, the countries where Central Asia Institute focuses its work.

CAI’s programs provide support to communities in these remote, high-mountain areas, where few other international organizations work and where local culture and traditions still hold sway. Delivering on our mission of bringing education, especially for girls and women, to these areas requires meeting people where they are—understanding their values, attitudes, and traditions. We do so by working through local partners who collaborate closely with community members to ensure their buy-in and the sustainability of our programs. 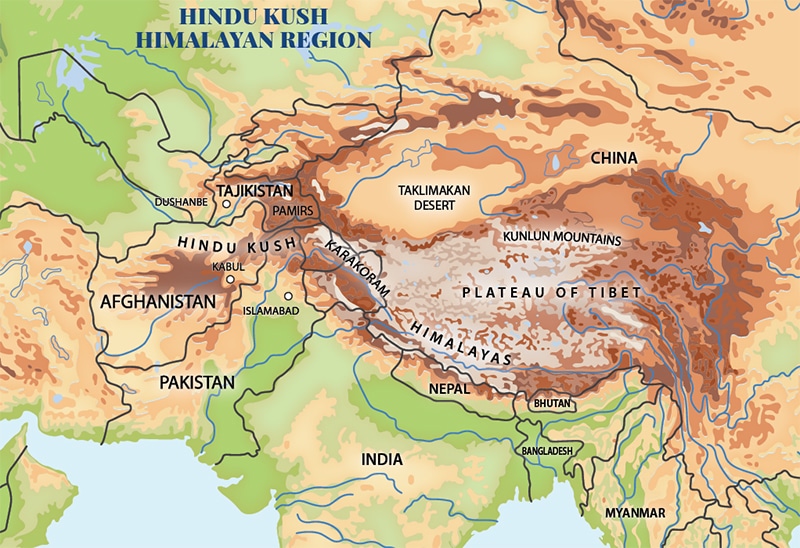 For many living on the “Roof of the World”, life is lived above the clouds. The average altitude of a Hindu Kush peak is 14,700 feet above sea level, and the highest peak in the Karakoram range, K2, reaches a staggering 28,251 feet. Remote communities spread throughout isolated valleys are often cut off in the wintertime, when heavy snow and treacherous roads make transportation difficult. In addition to harsh winters, the area is prone to natural disasters like earthquakes, droughts, flooding, and mudslides. The effects of climate change are also being felt, including more frequent and severe weather-related disasters, threatening the fragile, high-mountain ecosystem on which local people depend. [See the article on climate change and girls’ education on p. 28.]

These mountain communities have adapted to the unforgiving climate over centuries. Their houses are specially designed to withstand frigid winters, keeping inhabitants warm while serving as a place of work, rest, and worship year-round. The traditional Pamiri house, a chid, is built of stones, mud-plastered walls, and flat roofing. Chids consist of a large central living room, five wooden beams that provide support and help withstand earthquakes, and an elaborate skylight built with four concentric square layers representing earth, water, air, and fire.

Households usually include the entire extended family: mother, father, grandparents, kids, aunts, uncles, and cousins. This large family structure keeps the home warm during the cold winters. It’s also common among ethnic peoples like the Balti to keep their livestock on the ground floor of the home at night to generate heat. In the summers, families do much of their work, such as spinning wool or drying animal dung for fuel, on the flat roof of their home. 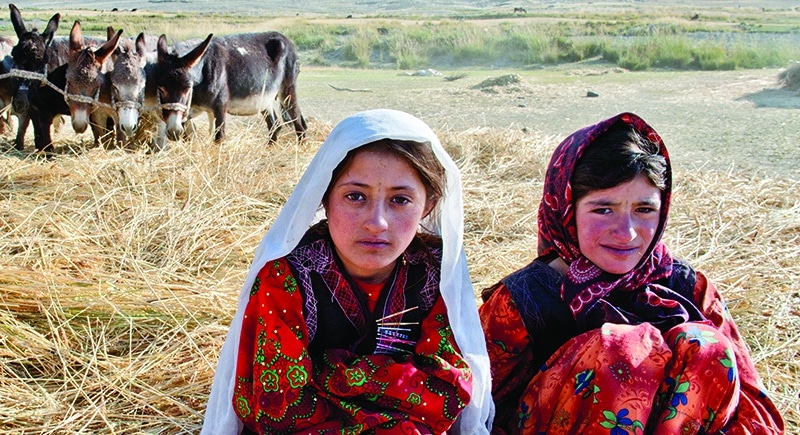 The high-mountain communities of the Hindu Kush Himalayan region are culturally rich and diverse. The people who live there have adapted to different empires and influences over the centuries yet are proud to have maintained their beliefs and traditions.

One of these populations, the Pamiri people, live in the Badakhshan region that spans Afghanistan and Tajikistan. The Pamiris are known for their hospitality and love of tradition. Classic Pamiri clothing consists of dresses and other attire bursting with bright colors, especially red, and heavy use of patterns and embroidery. These outfits are often accompanied by tokis (skullcaps), beaded jewelry, and colorful patterned wool socks.

The Baltis are an ethnic group of Tibetan descent. They live in the Karakoram mountains of northern Pakistan, in the narrow, fertile valleys formed by the tributaries of the Indus River. While not nomadic, they graze their livestock from one mountain pasture to another with the changing of the seasons. The Balti wear traditional wool clothing to keep them warm in the frigid alpine region where they live. Women usually wear black while men wear white. Both men and women wear skullcaps embroidered with flowers, berries, or leaves.

The Wakhi predominantly live in the Wakhan Corridor, the narrow strip of Afghanistan that lies snuggled between three major mountain ranges. Known to be peaceful, welcoming, and honest, the Wakhi are mostly nomadic and often have two homes, one for the winter and one for the summer. The men are responsible for farming and weaving wool, whereas the women look after the home and cattle. They love traditional music made with daf frame drums, flutes, and rababs. They also wear distinct wool headwear and use the colors
of their clothing to indicate emotion. Like much of Central Asia, the mountain communities of the Pamir and Hindu Kush regions practice Islam. Many of them adhere to a lesser-known branch of Shi’a Islam, known as Ismailism. They believe that Muhammad was the last prophet of God and that the Holy Qur’an, God’s final revelation to mankind, was revealed through him. Although they believe that the Prophet Muhammad was the last of the prophets, they feel that spiritual and moral guidance is provided by his descendants. This guidance is embodied in the Aga Khan, their spiritual leader. The current Aga Khan is the 49th hereditary Imam (leader), and Ismailis believe he is a direct descendant of Muhammad. Ismailis express their values and traditions with a commitment to search for knowledge to better oneself and society, to build bridges of peace and understanding, and to share one’s time and talents.

These mountain-dwelling people live in some of the most remote and extreme conditions in the world, yet they boast a unique and beautiful mix of cultures. While each ethnic population has distinct traits, tongues, and traditions, they are unified in their place on the “Roof of the World.” Central Asia Institute is honored to work in this part of the world and serve these magnificent people.

Learn more about the “Roof of the World”

To learn more about the rich culture and history of the people who
inhabit this unique and fascinating part of the world, please check out
the following resources: